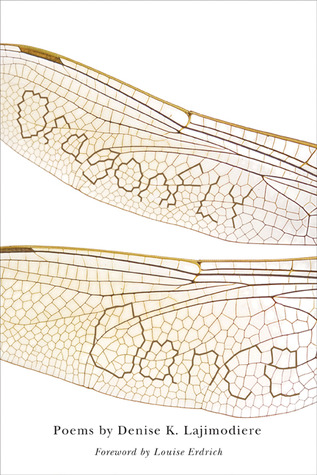 I’m going to be honest here. I felt more trepidation reading Dragonfly Dance by Denise K. Lajimodiere, then the erotica romance earlier in the week.  Even though I went through an angsty period in high school writing poetry that my parents and friends pretended to gush over, I don’t really know too much about it. All my stuff was pretty self evident about what I was talking about. When I think of reading poetry, I worry that I’m missing some hidden message that smarter people are nodding at and applauding the poet’s use of metaphors.

Dragonfly Dance probably had some metaphors I wasn’t getting, however it seems most of Lajimodiere’s emotions could be seen on the surface, even by this Philistine. Among others there were poems about abuse, living on the reservation, and the white perception of Native Americans. My heart broke at times, but also it filled with tenderness. One of my favorites was “Grand Forks;” I lived there for 2 years and chortled at the line “how can anyone live here?” Another was “May 11, 1980” which was about a mom whose little girl tells her she wants to be white when she grows up because that’s all she’s seeing in magazines. That one broke my heart and continued to cement my belief that we have a long way to go in diversity in our media. The one that made me chuckle was “Kicking Thunder” because it’s about a little boy who is scared of the thunderstorm that’s happening, but only wearing a diaper he goes and gets his cowboy boots to go outside to “kick the thunder.” I have two little boys and it is something they would do.

I am going to try a bit harder to read more poetry. I definitely like Lajimodiere’s writing so her writing is something I’m  extremely interested in reading more of.

Anyone else intimidated by poetry? Any tips to work through the intimidation? Do you have a favorite collection? Favorite poet?