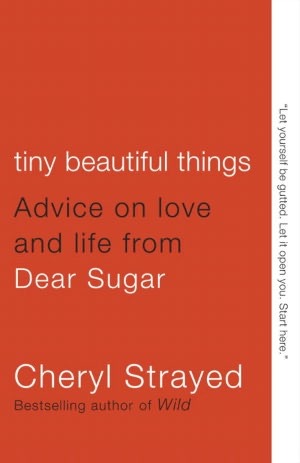 I needed this book without knowing I needed it. I generally come from a scoffing opinion when it comes to self help books. I know I’m not the only one. There are some silly ones out there that sometimes eclipse the awesome ones. I have a bias and I’m not proud of it. Which is why I’m glad to see it on the challenge. I’m trying to expand my horizons. However, Cheryl Strayed’s Tiny Beautiful Things might have broken that bias a bit.
It’s at times beautiful, or soul wrenching, but it was always truthful. Strayed, or Sugar as she was referred to when she wrote the column for TheRumpus.com stands by the advice she gives as she says in the book. And she should. I don’t know if all of her advice is the right advice because like she also says, it’s not up to her to decide what is right for someone else. But she believes in her opinions.
I found a few of the letters hit amazingly close to home. I’m not in a place where I want to share which ones, but let’s just say to reading something that resembles something you’re dealing with or feeling is a bit like being struck by lightning. It’s awesome and terrifying.
I don’t do this often, but you need this book in your life. You need to pick it up and let Sugar tell you in her no-nonsense, profanity laden (I dig profanity when used right and she uses it beautifully) way that you’re in control of your own life and there are ways to deal with those fucked up situations that we all find ourselves in at some point or another. She’s not preachy or judgmental. Even when she’s telling someone they done messed up, I felt like she was doing from a place of empathy instead of righteousness.

One thought on “Task 24: A Self Help book: Tiny Beautiful Things: Advice on love and life from Dear Sugar”