This month the Ladies Reading Speculative Fiction book club read Redwood and Wildfire by Andrea Hairston. We haven’t picked our August book yet so stay tuned!

Here’s what some of us enjoyed this month outside of our book club read.

Roses and Rot by Kat Howard. This hit all the right buttons for me: an artists’ colony on the edge of Faerie? Where do I sign up? Although, like any “true” tale of the Fae, that attractive idea is more of a snare than a treat. The voice of the novel manages to feel real and contemporary while weaving in all the peril and beauty of fairy tales. Excerpts of the main character’s own writing project insightfully explore the themes of those evergreen stories. Echoes of Tam Lin foreshadow the climactic struggle of artists from all disciplines competing to be good enough for the Fae. Anyone who has asked themselves why they work so hard to “make it” in the arts will understand the stakes. Add to the mix a “stage mom” worse than any stepmother, and a sister-love better than Anna and Elsa – Roses and Rot kept me enthralled. One of my top reads this year. –Juniper

Watership Down by Richard Adams. There’s a Seanan McGuire quote about Watership Down, which is roughly that it takes an extraordinary book and an extraordinary writer for a book about rabbits to be more reflective of the human condition than most books about humanity, and it’s completely spot-on. I’ve read this book so many times that I can’t even begin to count them all, and each time has been equally precious and important to me. There’s a tendency for people to look at Watership Down and think, “ah, a kids’ book about rabbits, this won’t be that rewarding,” and that tendency is incredibly unfortunate. Watership is one of the most rewarding books I’ve ever read, which is why I  keep coming back to it. It’s about rabbits, yes, and you can absolutely read it to your children. However, its success lies in things that appeal to ten-year-olds and fifty-year-olds alike: This is a story about danger, war, camaraderie, loyalty, death, and need. It’s about refugees setting up in new territory, being welcomed and rejected in turn, and figuring out how it is that they must live their lives in their new home. It leans heavily on the loyalty and love between those who leave home together and fight together to find a new place in the world, and it always returns to hope, joy in the smallest things in life, and the bonds between us. -Anie

As for me. I thoroughly enjoyed Homegoing by Yaa Gyasi. It was a heartbreaking story told in 300 years of one family from Ghana. I loved the changing POVs as it moved from one generation to the next. You get a sense of how each character saw themselves and how then they were perceived by their descendants as well as how their choices (and in some cases their lack of freedom to make choices) affect the next generation.

This month the Ladies Reading Speculative Fiction book club read Ancient, Ancient by Kiini Ibura Salaam. Our next pick is Redwood and Wildfire by Andrea Hairston.

Here’s what the ladies enjoyed this month outside of our book club read.

Come as You Are: The Surprising Science That Will Transform Your Sex Life by Emily Nagoski. I can say that the subtitle is entirely apt. It sounds like a self-help book, but it’s more like a self-acceptance book – and that REALLY HELPS! We all tend to think we’re at least a little bit broken, so…just read this. And then gush about it to your partner. –Juniper

“Fable” by Charles Yu. A few years ago I picked up Yu’s How to Live Safely in a Science Fictional Universe on the recommendation of my friend Oliver. I’ve read a lot of science fiction and it’s rare that I read something truly surprising, but Yu’s novel was rich, complex, innovative, and heartfelt. So when I heard this week that Yu had a story in the New Yorker, I immediately went to check it out. “Fable” took my breath away. Yu deconstructs allegory in his stories. Instead of disguising the true content of his narratives, he presses the edges of them by meticulously unwinding the metaphorical veneer surrounding them, stitch by stitch. “Fable” is simultaneously a surreal and true-to-life tale about the nature of love, heartbreak, and family and how we work our way through it. He wields a plain, seemingly simplistic writing style defiantly, revealing the deeply moving story underneath. It’s well worth a read. –Clara

As for me. Binti by Nnedi Okorafor. I knew I loved Nnedi’s books after reading Who Fears Death and The Book of Phoenix, but Binti just made it even more so. I got to dish about it a lot during Bout of Books and was thrilled when someone read it on my recommendation and loved it. It’s a wonderful feeling. She’s also a favorite of the book club (we got to meet her when she came to speak at UCSC a couple months ago). Nnedi’s worldbuilding is so intricate, even in a less than 100 page novella. I can’t wait until January for book 2.

What a day. If you’re a book nerd (which you’re here, so I’m gonna assume that’s a yes), you know that April 30th was Independent Bookstore Day which basically as you can tell from the name, celebrates our indie bookstores. It started in 2014 as California (hells yeah) Bookstore Day, but quickly the whole nation got on board with the awesome. I’ve been going to my local indie Bookshop Santa Cruz from the first year. Usually there are exclusive items you can only buy on that day, games to play, prizes to be won, and other fun activities. This year BSC kept up their reputation for awesome. There was a wheel to spin if you bought at least one of the exclusive items and were a part of their reader’s club that awarded fabulous prizes. I won a tote which I swapped to my bestie for a 20% off one item since she wanted a tote and I have approximately one million of them.

We also did a fun scavenger hunt around the bookstore where they gave us a partial thumbnail of  several book covers and hints where to find them around the store. We ran into a few problems when books had been moved from their places, but I worked with two of my buddies (and fellow Ladies Reading Speculative Fiction members) and we prevailed. Unfortunately I didn’t get a picture of it.

Then there was the photo booth! I gathered part of the book club and we got our glam on.

After an afternoon of haircuts and other fun errands, we gathered back at Bookshop for Trivia Night. Armed with free beer from Santa Cruz Mountain Brewery, six of the Speculative Fiction book club came and we almost conquered. After three rounds of literary trivia, we came in second place. I’m pretty proud of that. We won the third round after a tie breaker and won fabulous BSC mugs.

Without googling see if you can answer these! Put your answers in the comments. If you love me though, you’ll skip the GoT one though.

How did you celebrate Indie Bookstore Day?

This month the Ladies Reading Speculative Fiction book club read The Fifth Season by N.K. Jemisin. It was a club wide hit. Our next book will be Ancient, Ancient by Kiini Ibura Salaam.

Here’s what the ladies enjoyed this month outside of our book club read. 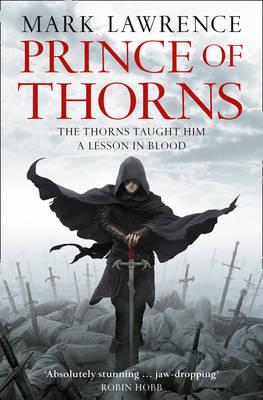 Prince of Thorns (The Broken Empire, #1) by Mark Lawrence. I don’t know if you have to come into this book already liking “grimdark,” but I’m sure it helps. Jorg is the ultimate anti-hero, especially considering he’s only 13 in the first book. Looking at who he is from the outside, he’s utterly repulsive. So what makes Jorg charming despite his deeds? A cheerfully self-incisive voice, and the enigma of his free will. It also doesn’t hurt that Mark Lawrence has an incredibly deft hand with prose. Just about every paragraph is a lean, mean vehicle that delivers characterization, worldbuilding, and plot advancement with a clever twist of gallows humor. This was a fast-paced and disturbingly compelling read. – Juniper

The Fifth Season (The Broken Kingdoms, #1) by NK Jemisin. This was everything I wanted and more. A non-linear tale with three perfectly converging stories; imaginative, gorgeous world building; characters that I adored and who developed so brilliantly over the course of the book; amazing suspense; graceful prose that I kept pausing to mark down; and the best god damned last line. Add in the part where Robin Miles is an immensely talented narrator and I just – everyone read this book, now. –Anie 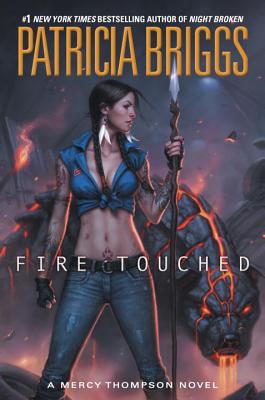 Fire Touched (Mercy Thompson, #9) by Patricia Briggs. I like the series because Mercy Thompson is a shapeshifting coyote in a werewolf world and she’s sort of an underdog compared to the werewolves, however, she always manages to pull off whatever it is she is trying to accomplish through sheer will and the occasional help of fey friends. I enjoyed the mixing of Native American lore around Coyote with the lore behind werewolves, witches, vampires and the fey. Patricia also imagines what life would be like both politically and emotionally for those who chose to “come out” as less than human. –Karly

As for me. Hamilton: The Revolution by Lin-Manuel Miranda and Jeremy McCarter. Remember how I said i liked behind the scenes stories, this is a great piece about  the hit Broadway play Hamilton from its inception to closing curtain on opening night on Broadway. Filled with essays about the cast and costumes and staging as well as personal annotations from Lin on the full lyrics from the play, if you’re a Hamilton fan, you need this book. Be warned it is out of stock on several places so you may need to do some digging.